Value of Faircoin in the fair ecosystem

of a very basic cost of living

For transactions within the web of trust of the fair economy.

Ranging from - to - Fairo per Faircoin when guided by a FairPoints rating.

For exchanges where central bank money is given in exchange for Faircoin to fair market participants as solidarity support for building the fair economy.

Current valuation outside the fair economy

You are encouraged to buy such Faircoins from cryptocurrency exchanges below the Fairo rate and donate or invest them in fair economy projects.

To find out more about Faircoin, the cryptocurrency: https://fair-coin.org

The following form allows for a very simple assessment regarding at which stage of transformation towards a manifested fair economy you or any other makret participants currently are.

The resulting ratings are ranging from 0 to a maximum of 3 FairPoints.
Just check below the criteria you think are fulfilled in the following three domains:

The calculated FairPoints rating can for example be used to determine a fair Solidarity Exchange rate (see above).

Fairo rates are recommended for use when making transactions in the web-of-trust of the translocal fair economy.

Local groups are autonomous to set recommended Fairo exchange rates adjusted to their local circumstances.
For the translocal Fairo rates recommended on this website, we discuss adjustments in the Fairo Telegram group. You are welcome to participate.

The Fairo is a unit of measure for purchasing power. The value that 1 Fairo represents is equivalent to one thousandth of the mean future basic cost of living for one month, which was the purchasing power of 20 Faircoin at the end of the year 2016.

What purpose does the Fairo serve?

Faircoin is the proof-of-cooperation crypto-currency that serves as medium of exchange and store of value in the fair economy.
https://fair-coin.org

What is the fair economy?

The fair economy is a global grassroots movement that embraces intergral revolution, peer-to-peer culture and hacker ethics to make the transition to a new world, reducing as much as possible economic and social inequalities among human beings, and at the same time contributing to a new global wealth, accessible to all mankind as commons.
https://fair.coop

How is the Fairo used?

Most commonly, Fairo is used to measure the quantity of Faircoin to be transfered in a trade transaction. It can also be used as reference when making transactions with another medium of exchange such as a mutual credit system or other local and social currencies.

How are Fairo rates set?

The conversion rates for Faircoin represents an adjusted mean based on market activity with a delay of about 10 minutes. Other Fairo rates are periodically reviewed and adjusted to deflation and inflation based on consensus in the open assemblies of Fairo stakeholders and the local groups using these other currencies.
The following formula was agreed in the fair ecosystem movement's general assembly.
The Fairo/Faircoin rate is a moving average calculated as:

Why are Fairo and FairCoop rates set above the value of Faircoin outside the fair economy?

They account for the value of the level of trust in the economic reality for different tiers of the local, translocal and global fair economy. At each tier, they help to keep value from being extracted from the fair economy by capitalist market speculation.

When making a transaction in Fairo, you back them with the medium of exchange, such as Faircoin or some other form of ledger. Such mediums of exchange, like a paper note, can then be backed by assets.

Fairero is what we call the equivalent of a Satoshi in Faircoin, the smallest fraction of a Faircoin.

Enabling the Fairo rates in your Faircoin wallets

Download and install the most current version of the ElectrumFair Desktop wallet for Linux, MacOS or Windows from https://faircoin.co/download/.

To set the wallet to display the Fairo rate, go to the preference settings panel and select the Fiat settings section: 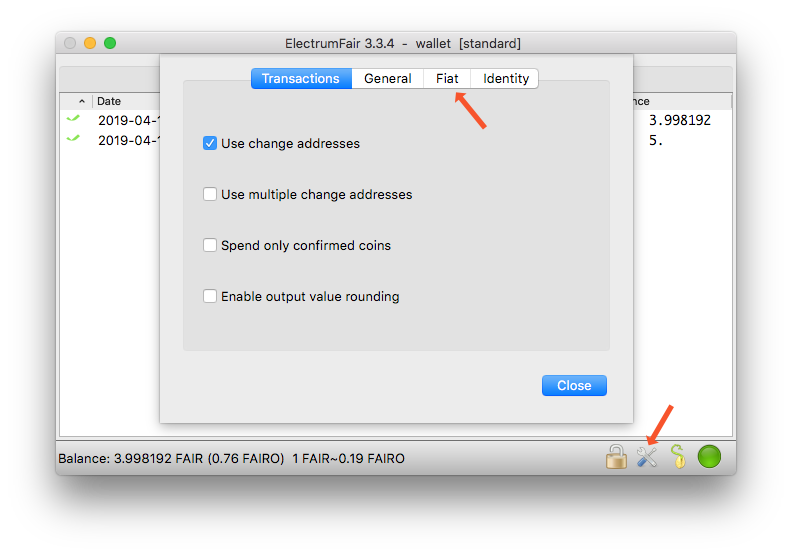 Set the "Fiat currency" to FAIRO and the "Source" to FairCoop_ChainFaircoin:

Your desktop wallet will now show Faircoin values in Fairo.

Download and install the most current version of the Faircoin Android wallet from https://download.faircoin.world/.

To set the wallet to display the Fairo rate, go to the settings menu and select the Exchange rates option: 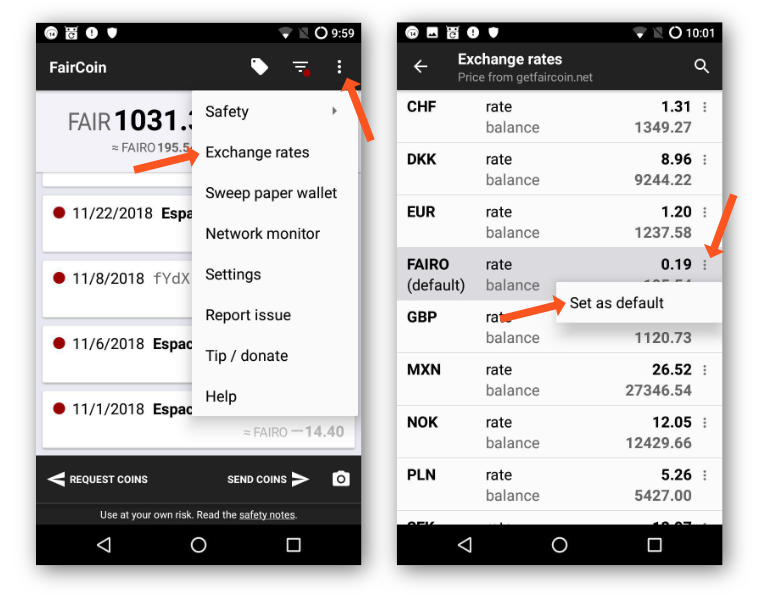 Your mobile wallet will now show Faircoin values in Fairo.